Wounded Canadian soldiers awaiting to be transferred off the beach and to the hospitals run by the Royal Canadian Medical Corps.

Meanwhile back with the Infantry...

After making it out of their landing crafts the Canadians advanced through the German beach obstacles, across large stretches of machine gun fire , and were now almost at the seawall. The men could go no further as the next stretch of land was impeded by a large wall of barbwire. Every so often another solider would make it to this spot and although the small number of men actually joining the rest of the soldiers were quite shocking , it still meant men were piling up in this area and room/time was running out. Too advance forward to the seawall, the men had to first clear the barbwire wall in front of them.

The photo shows the men at Utah beach, which was being taken by the American's at the time. The men stay close to the dug out near the sea wall , awaiting their advancement up the banks of the beach. (IWM)

This barbed wire wall would be overcome by some fortunate soldiers who could achieve bringing along Bangalore torpedoes which were long pipe bombs used to clear obstacles. As some Bangalores were managed to be brought up to the wall, the soldiers would slide them into the barbed wire entanglements and would light the fuses. This momentarily created a explosion and dust screen. The men were now able to run through the broken barbed wire walls with the support of cover fire to finally make it to the seawall. The seawall was just out of range from enemy fire from the pill boxes and just low enough to just evade sand dune machine gun nests. 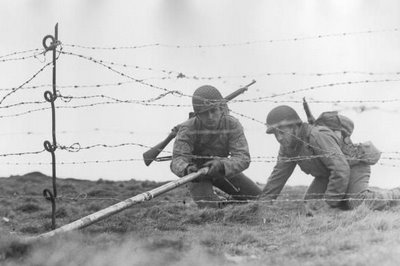 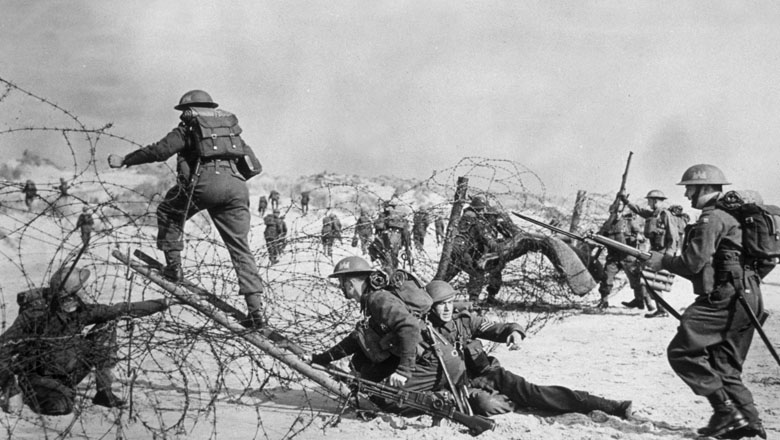 Photos of Allied troops moving through the enemy barbed wire on the beach and using the Bangalore Torpedoes.

By 8:20 am the first tanks are finally seen making there way to shore, they are severely late and barely any made it to the beach at all due to weather conditions. The tanks were so sparsely spread, you were lucky to even see 1 at your sector. By this time around 50% of the men who first landed on the beach were dead and were still unable to clear the beach for the next wave of men coming. The number’s may have been low, but the 2nd Canadian Armoured Brigade was having some success as it was useful in clearing much of the larger gun positions. The men were now able to move up the beach with a bit more confidence. 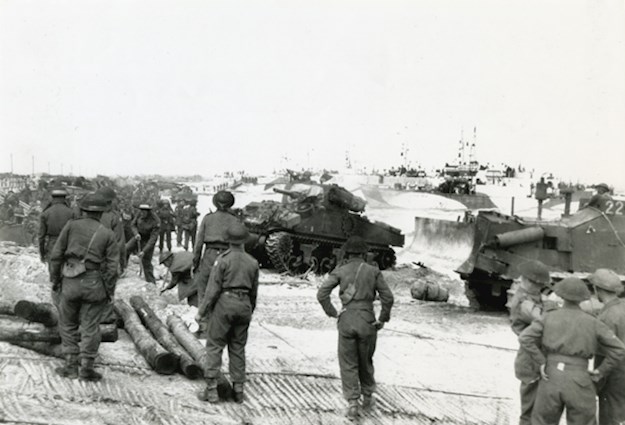 On the left is a rare photograph of Sherman Tanks that were able to land on Juno beach after the initial fighting was over. The photo on the right shows a Duplex Drive tank that would have had large curtains surrounding it as well as sporting a propeller to allow the tank to move through water and make an amphibious landing on the beach.

The tanks were fortunately able to destroy many of the machine gun nests hidden in the sand dunes, as well as any exposed guns on the beach. Although there were still some heavy machine gun positions tucked away behind enemy concrete fortification that the tanks could not reach. The men would now have to clear some of these positions on their own , as the tanks were being shelled by anti-tank rounds and were large targets. Soldiers would provide covering fire to allow a few brave men to run up to the concrete bunkers just close enough to chuck in some grenades and maybe get a clear shot of the enemy. 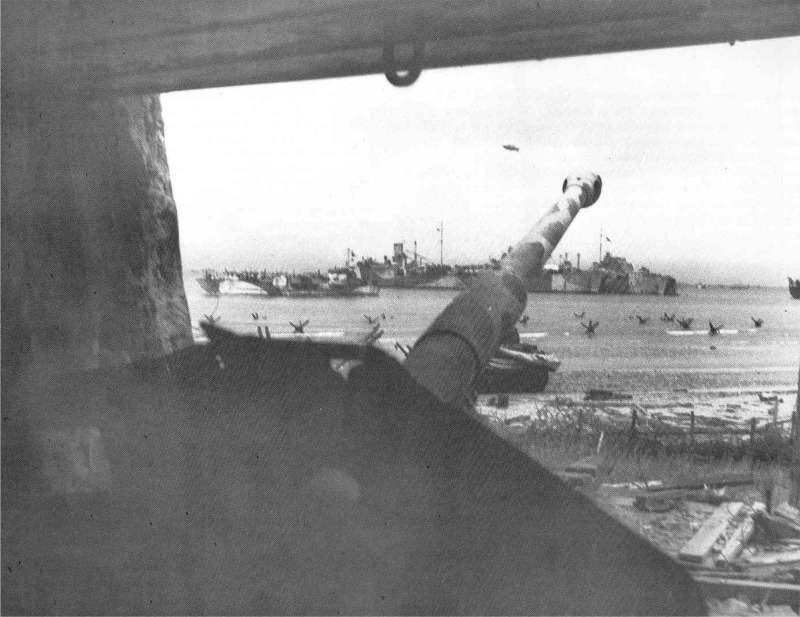 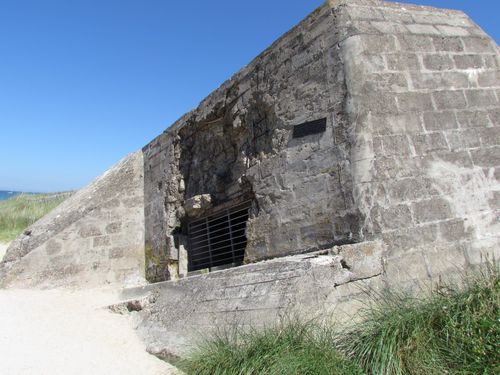 The pictures above show various pillboxes and machine nests along the Atlantic wall that the Canadian troops captured during their portion of the Battle of Normandy.

And with these heroic actions, the main guns and concrete pill boxes were taken care of and the tanks were now able to move forward and remove any more enemy positions with ease. Many hours went by until the Canadians were finally able to secure the beachfront and bring in their reinforcements and vehicles. Despite Canadian's being the last force to hit the beach, they were able to secure their location well before the Americans and British and was thought as the most successful of the 5 beach landings.

Aftermath of D-Day and D+3

In the end over 14,000 Canadians landed/parachuted into Normandy and over 10,000 sailor took part in the D-Day bombardments. The Canadians suffered over 1,200 causalities that day and despite the intense battle, they still prepared for D-Day +1 as this was only the beginning of the Battle of Normandy. This battle alone would take 425,000 Allied and German causalities.

After the beaches were secured the next course of action was to bring in supplies. A steady stream of supplies would be what gave the allies an edge in the war as every battle needed men, weapons , ammunition and food. Unfortunately the German forces had control over all of the French ports and the Allies needed to find another way to bring in supplies as capturing a port was deemed ineffective after the Dieppe landings in 1942. This led to the construction of the Mulberry Harbours which consisted of 2 habours that were divided into sections. These sections were manufactured in the United Kingdom and were large components made from steel and concrete. They were made to float as they were to be sailed down the English channel all the way to Normandy. These so called "Mulberries" were transported to Gold beach and Omaha beach to form Mulberry Harbour A and B. The harbour at Gold beach was used for almost a year and was able to move 2,500,000 men along with 500,000 vehicles and supplies. The harbour at Omaha beach was severely affected by storms and was abandoned, although at this point in time the Allies had pushed deeper into France and were capturing other ports. 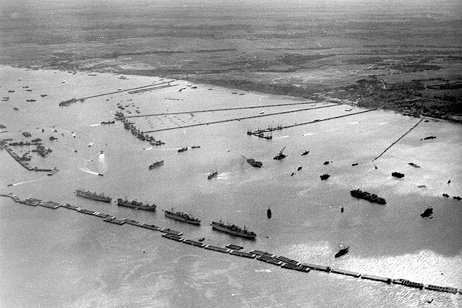 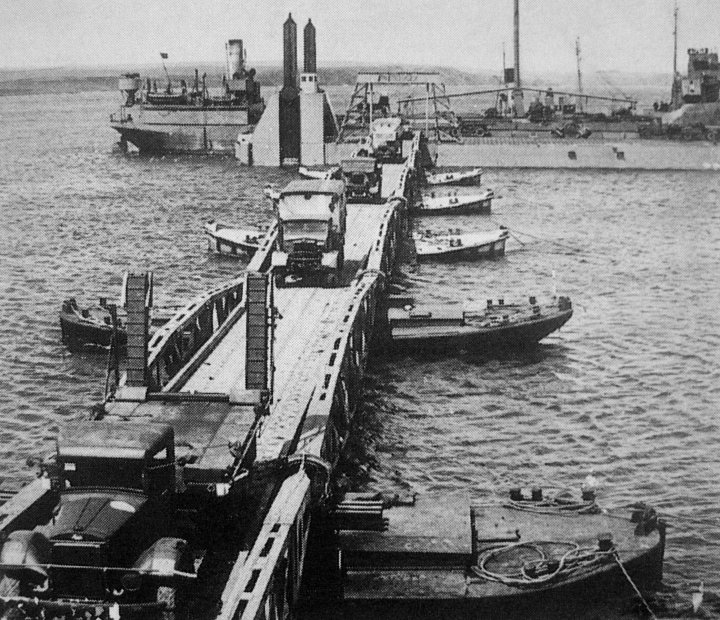 The Mulberry Harbours being assembled and used on the beaches after D-Day.

Once the Allied forces overcame the great challenge of taking the beachfront and successfully managing to fuel their progression, they were able to truly mark a major turning point in the war. And to the people back at home, it was starting to look like there was hope for a quick end to the war.

A Halifax bomber plane towing along a Horsa glider for D-Day.

While Canadian forces were storming the beach and landing deep into Nazi occupied France, the British were sending out a special group of 180 men on a important mission. This mission would be known as Operation Deadstick and was responsible for sending soldiers behind enemy line's to capture and demolish bridges to deny German re-enforcement's to the beaches.

As for Sword beach , which was being taken by the British infantry, only had 2 exits from the beach to join up with the rest of the Allied forces. Therefore a special group of men were needed to infiltrate these bridges, and capture them before the enemy had time to destroy them. This led to the 6th Airborne division to be tasked with landing at the Caen Canal to take the Bénouville Bridge which would be later known as Pegasus Bridge.

The name Pegasus bridge was derived from the logo that the 6th Airborne division wore. The logo is in reference to the flying horse , Pegasus.

On June 5th , the men were being flown across France in there Horsa gliders and landed just yards from there location. After 2 causalities and 10 minutes of action, Pegasus bridge was captured and held for 3 hours until re-enforcement arrived. This heroic mission resulted in the first causalities of D-Day as well as liberating the first house and bridge in their campaign through Europe. The Gondree Cafe was the first house across from the bridge that was liberated and is open today by Madame Gondree who was 4 years old when the 6th Airborne division knocked on their door. 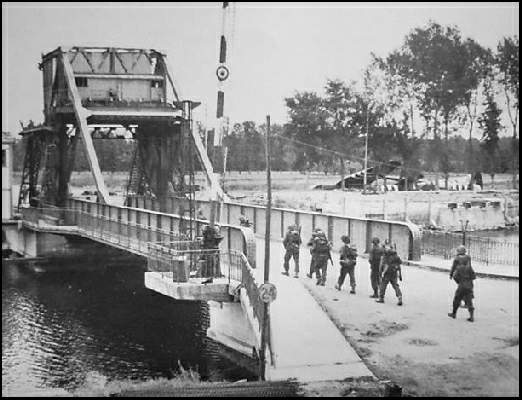 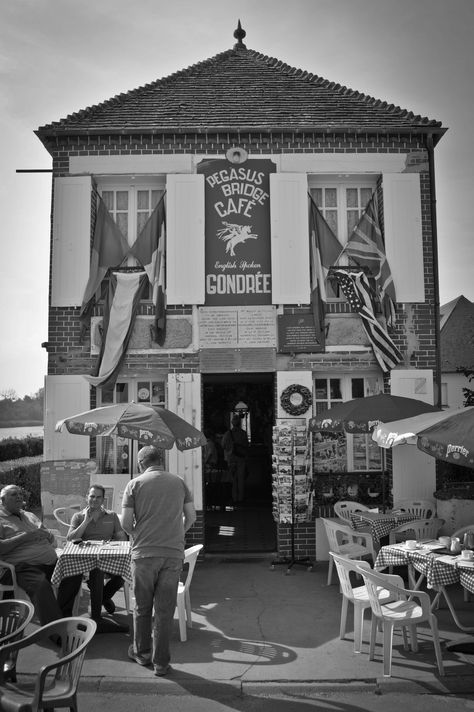 During our 4 tours into France to commemorate the 75th anniversary of D-Day we will be visiting the Gondree Cafe right outside Pegasus bridge where a larger recreation of the bridge functions today. The original bridge can be found nearby at the Pegasus Museum along with many other interesting relics of that event. If you would like to join us or would like some more information about our tours, please Click Here. 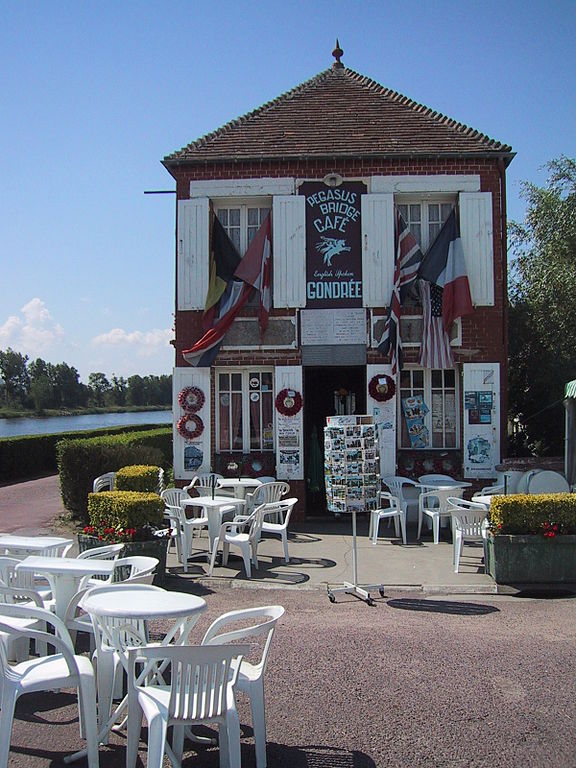 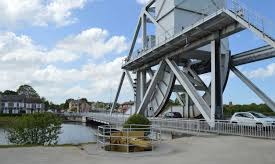 The Gondree Cafe and Pegasus Bridge still remain till this day.

If you would like to join us on the upcoming program commemorating the 75th Anniversary of Canadians in D-Day , or if you would like more information in regards to the events taking place in France for the anniversary, Click Here.