A Canadian's Journey Through D-Day Part 4: Liberation and Rememberance

The initial attack on Juno beach during June 6th was a success and marked the beginning of the nearly 3 month Battle of Normandy. This battle had the Canadian's pushing through the Caen region of France against some of Germany's best fighting units, the Armoured 12th SS Panzer Division. After many months of fighting, the Allied troops found themselves at a victory as August 21st 1944 marked the end of the Battle of Normandy. With the liberation of France and Belgium underway days later, the Canadians now had time to start taking action against the other Nazi occupied countries such as the Netherlands.

A coloured image of the liberation of Paris, France.

The liberation of the Netherlands was a long and costly battle that started 3 months after D-Day. The Allied forces devised a plan known as "Market Garden" which would be an airborne assault into occupied Netherlands. With this plan, also gave the Allies a direct route to Germany which would surely bring an end to the war.

The city of Rotterdam after a Nazi bombing raid.

The Battle of Arnhem and a Bridge too Far

In the beginning of September the Allied forces parachuted into the Netherlands, landing in the town of Arnhem. This attack was the initial step in Market Garden and had the Canadians tasked with securing important bridges and roads. In doing so had the Canadians undertaking intense house to house combat along the Rhine River while sustaining heavy causalities. In the end, the operation was a failure but nerveless consisted of some of the most fierce fighting in all of World War 2. The aftermath resulted in over 2000 deaths for the Allies and having almost 7000 troops captured with many going missing and dying in captivity.

The destroyed city of Arnhem after the Allied defeat during operation "Market Garden".

The Battle of Antwerp

With the large failure of Market Garden , led to the Allied forces second attempt to take Germany. The plan consisted of entering the already liberated country of Belgium, and use a port there to bring in supplies for the Allied advancements. Although Belgium was somewhat liberated , many parts still sported German resistance . One of these locations was the the city of Antwerp which needed to be cleared by the 1st Canadian Army. The Canadian managed to take a harbour and started to advance further into Belgium. 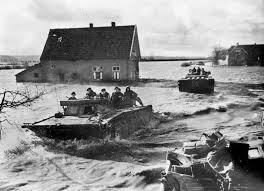 The Battle of Scheldt and The Rhine

With success in holding the harbour in Antwerp , had the Canadians now pushing into the Southern tips of the Netherlands. The battle that was later to come in these following weeks was what defined Canadian bravery by the Dutch today and has Holland remembering Canada ever since.

The Canadians were now in some uncomfortable fighting conditions as they marched through the Dutch country side. The land was mostly below the sea level which left the Canadians mostly fighting in wet soggy conditions. The landscape held a whole host of medical problems as the soldiers were getting sick and hungry as they were forced to keep pushing forward. The areas where surrounded by Dykes which were narrow paths for the troops to get trapped in as the enemy were able to use these as a perfect locations for a machine gun nest. On top of all this , the men were being given little to no supplies or re-enforcement's which was arguably the main reason why the assault was taking so long. 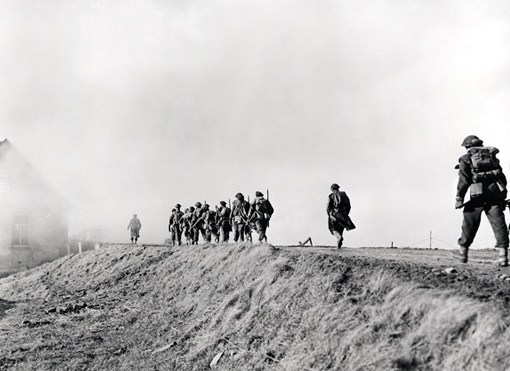 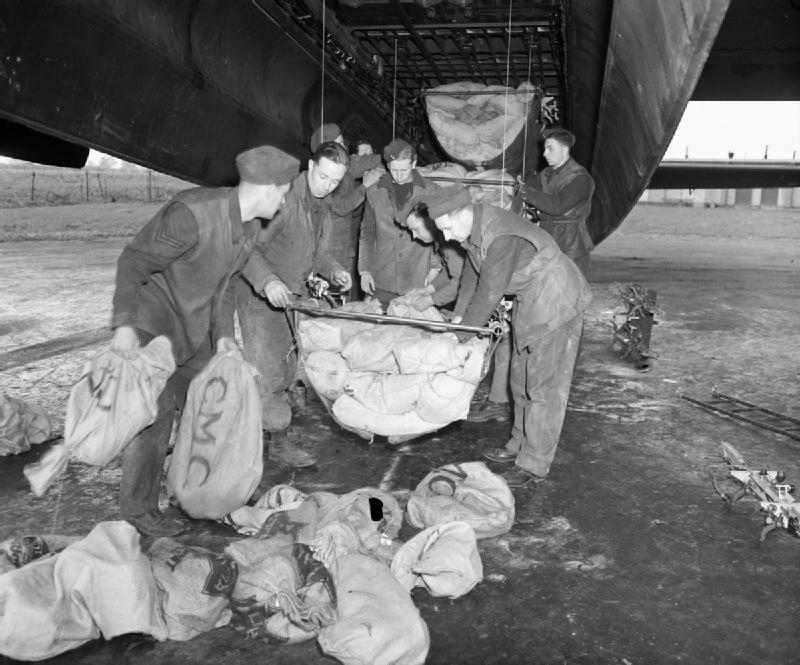 Canadian troops walking along a Dyke in the marshy lands of Holland. And Allied troops preparing to air drop food to starving Dutch citizens.

By November that year the Canadian's had secured the surrounding area around the Antwerp Harbour and The southern Netherlands Scheldt battle ground. Although this left the 1st Canadian Army with 13,000 causalities

The Americans were pushing the Germans back from Belgium along the Rhine. This led them in the Ardennes Forest for the Battle of the Bulge. The Canadians fought the Germans back towards the Americans and over the river and were now able to move further into the Netherlands.

The Canadians now made there way up the Netherlands in their final push to liberate the country. The conditions weren't much better than before which meant the 1st Canadian army would be fighting through flood lands and from house to house in close quarters combat. With the help of Dutch resistance fighters, the Canadians were able to re-capture major cities such as Amsterdam , Rotterdam , Hague , Arnhem and Apeldoorn in just a matter of days.

During this time the Canadian's decided to put a hault to their advancement towards the West. This was due to the fact that an April armistice was likely and further fighting wasn't necessary yet. At this point the Dutch people were living on less than 400 calories a day and were in dire need of relief. The Canadians gave support to the Dutch citizens and provided them with food and help they needed. And by May 5th the Germans surrendered to the Canadians and would completely surrender worldwide 2 days later.

This was a day the Dutch would never forget...

Canadian troops signing autographs as they ride through a Dutch town during the liberation of the Netherlands.

Every year on June 5th and 6th, people from around the world come together to remember the great sacrifice that the men and woman of the Allied and Germans forces made as over 450,000 individuals were killed or wounded during the Battle of Normandy.

At the end of the Battle of Normandy there was over 18,700 Canadian causalities with around 5500 of them never making it home. There are many cemeteries and monuments throughout Europe honouring the brave Canadian soldiers who gave there lives for their country. The location of the original Juno Beach landing area now houses the Juno Beach Centre as well as monuments commemorating the soldiers in Courseulles-sur-Mer, France. 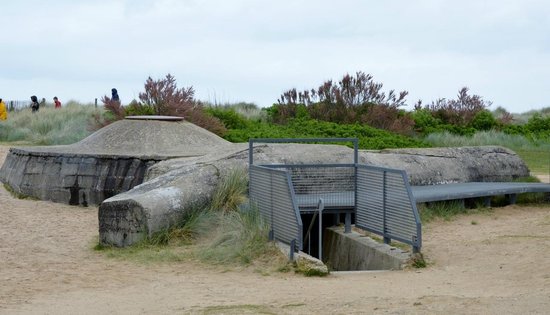 The first photo shows the memorials that are right outside the Juno Beach Centre. There you will find the names of the men you lost their lives on that beach. The second photo shows the entrance to the Atlantic Wall tour.

The Juno Beach Centre is a Canadian War museum that pays homage to not only the soldiers who fought on D-Day, but also the 45,000 Canadians who lost their lives during all of World War 2. The museum contains many exhibits and artifacts with the aim to educate the population on what it was like for those who fought. Just outside the Centre, one can find a tour of whats left of the Atlantic wall and explore some of the left over bunkers and tunnels. There are many monuments scattered around the Juno Beach park itself which all act as a good place to pay your respects, with some baring the names of soldiers and regiments.

The most incredible statue at the Juno Beach Park stands directly outside the Centre and sports three soldiers which represent the Canadians crashing through the waves as they came to Normandy to bring freedom.

During the actual Juno Beach anniversary ceremonies, many Veterans from around the world come back to the Juno Beach Centre to pay their respects and interact with the community. The day consists of the the Canadian Prime Minister and individuals from the British Royal family giving speeches to honour and remember those who fought for Canada which was apart of the British Commonwealth. Visitors often also make their way to the cemeteries which aren't too far from the beach to visit the solider's graves and find the names of family members or people from their hometown. 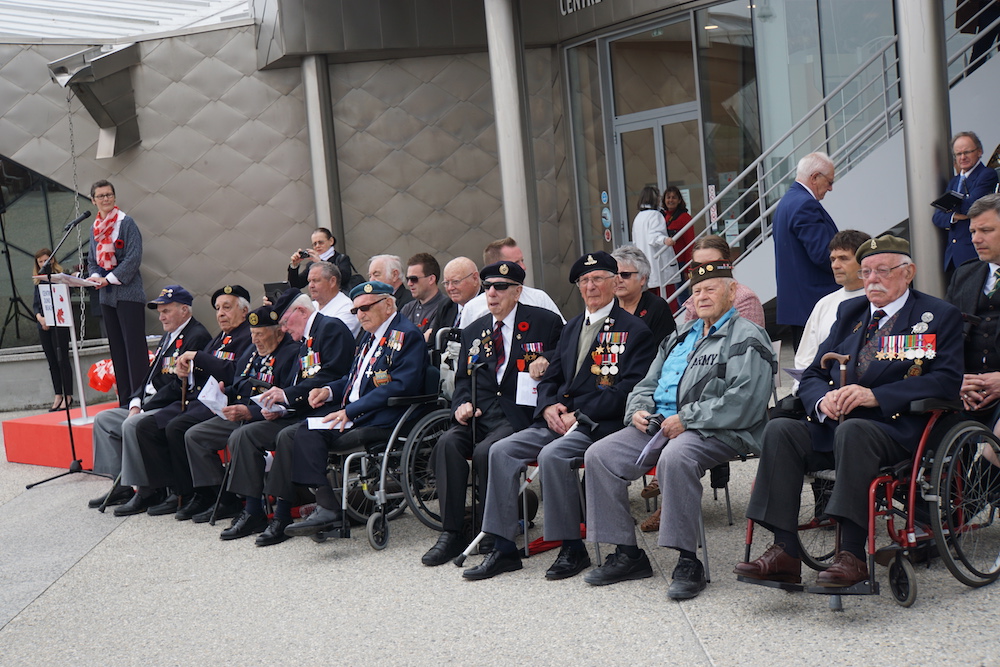 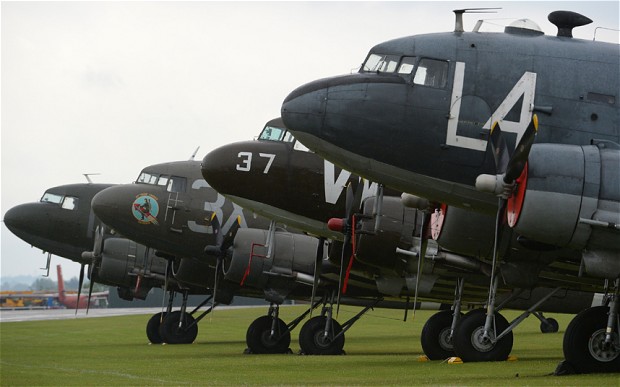 With the 75th anniversary of the D-Day landings coming up within the next year , The Battlefield Tour community has set up 4 unique tours for the upcoming events. Each tour is different and revolves around the 75th D-Day ceremony and depending on what tour you choose, may contain locations from WW1 or parts of the Canadian campaign in Holland as well! For anyone who would like to experience Europe under a World War 2 lens and see the historical locations of the Battle of Normandy and Flanders then join us today! And for those who would like to experience the tour but can not make it for the summer, D-Day tours in the fall will be available too.

If you would like to join us on the upcoming program commemorating the 75th Anniversary of Canadians in D-Day , or if you would like more information in regards to the events taking place in France for the anniversary, Click Here.